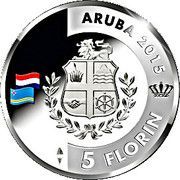 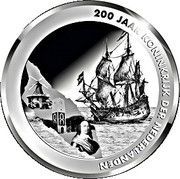 200 years Kingdom of the Netherlands

Coat of arms, denomination below, coloured flag of the Netherlands and Aruba

Map of Aruba with landmarks and sailing ship

Translation: 200 years Kingdom of the Netherlands

Between 2013 and 2015 celebration are held in different parts of the Kingdom of the Netherlands to commemorate its bicentennial anniversary. Aruba, which forms part of the Kingdom of the Netherlands since 1636, issued a silver 5 Florin coin to commemorate this special occasion. Johannes van Walbeeck, in service of the West Indian Company, was the first Dutch commander to set foot to Aruba. Important Dutch landmarks in Aruba are the Fort Zoutman (and the King William III tower) and the Old Mill.

Bullion value: 20.33 USD Search tips
This value is given for information purpose only. It is based on a price of silver at 879 USD/kg. Numista does not buy or sell coins or metal.