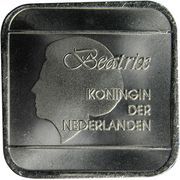 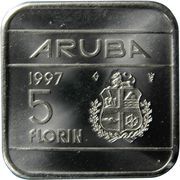 Translation:
Beatrix
QUEEN OF THE NETHERLANDS

National arms of Aruba with value

Entered circulation in December 1995, withdrawn on 1 October 2005 and exchangeable until 1 September 2006.