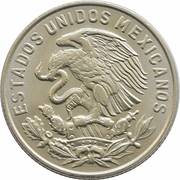 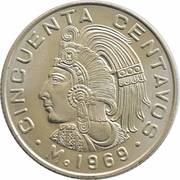 The arms of Mexico with the country name above

King Cuauhtemoc facing left, with feather crown, the value above, the mintmark in the feather crown with 'o' atop of 'M' and under the bust with 'o' to the right of 'M' next to the date