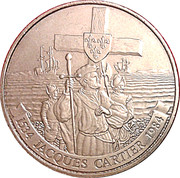 The portrait in right profile of Elizabeth II, when she was 39 years old, is surrounded with the inscriptions "ELIZABETH II" and "CANADA" and the face value

The explorer Jacques Cartier and 2 soldiers in front of a cross, 2 ships on the horizon.