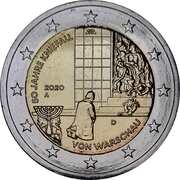 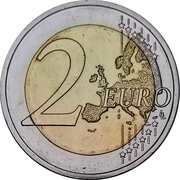 The Federal Government has decided to have a € 2 commemorative coin "50 Years of Warsaw's Kneeling" minted and to issue it in October 2020. The coin commemorates the kneeling of Willy Brandt in front of the war memorial for the heroes of the ghetto in Warsaw, which is celebrating its 50th anniversary on December 7, 2020.

The national side (picture side) was designed by the artist Bodo Broschat from Berlin. The motif shows the moment of the kneeling of the then German Chancellor as a gesture of humility in front of the memorial to the heroes of the ghetto in Warsaw. The composition represents the reference to the ghetto uprising in 1943 in an impressive way. The design is worked in extremely fine relief technology and takes up strong symbols: the seven-armed candlestick, the ghetto victims and the knee, about which Brandt himself later wrote in his memories : "On the abyss of German history and under the burden of the millions murdered, I did what people do when language fails.".
(Willy Brandt, Memories, Frankfurt am Main 1989, p. 214)