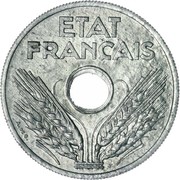 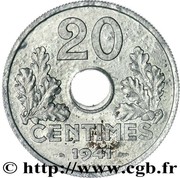 Value above and below hole, date below.

The change in weight happens by the application of a decree of 26 July 1943. The 2 varieties exist only for the year 1943 (from the french book "the Franc IX"). The World Coins is wrong when mentioning the 2 varieties for 1941 and 1942.
Some Numista members found coins of weighing 3 to 3.5 grams for coins from 1941 they have to be considered as heavy even if their weight is not clearly heavy.