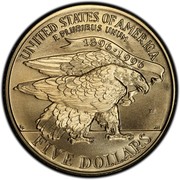 Olympic Stadium used for the 1996 Olympic Games, along with the logo.

Lettering:
LIBERTY
THE CENTENNIAL GAMES
IN GOD WE TRUST
Atlanta
1995

This value is given for information purpose only. It is based on a price of gold at 61 986 USD/kg. Numista does not buy or sell coins or metal.