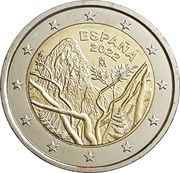 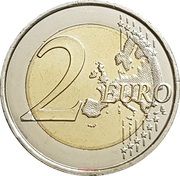 "Roque de Agando" and a detail of the laurisilva forest.

A geographical map of Western Europe spans the outer ring and inner core on the right side of the coin. The inscription 2 EURO is superimposed over the map of Europe, with the numeral “2” located in an open field representing the eastern Atlantic Ocean.

12 stars are located on the right side of the outer ring, with six stars atop the map of Europe and six stars below it; six vertical stripes cut across the inner core of the coin, visually connecting the upper and lower star segments.

Garajonay National Park is located in the center and north of the island of La Gomera, one of the Canary Islands (Spain). It was declared a national park in 1981 and a World Heritage Site by UNESCO in 1986. It occupies 40 km2 (15 sq mi) and it extends into each of the six municipalities on the island.