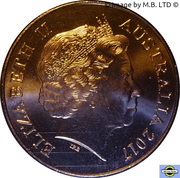 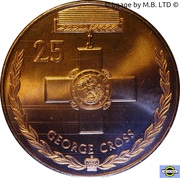 Legends of the Anzacs - George Cross

This 25 Cent coin is part of the second series of "Quarters" issued by the RAM. Although not meant for circulation it is legal tender. This particular coin refers to the George Cross medal which was instituted by King George VI during the Second World War as the second highest award for gallantry after the Victoria Cross. It recognises courageous acts by civilians and by service personnel not in the face of the enemy or where usual military honours would not apply.