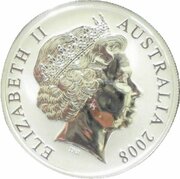 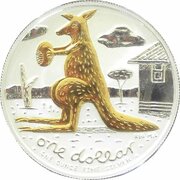 An outdoor scene of a kangaroo holding a football facing left. The Kangaroo and football are finished in Gilt

Released by the RAM in 2008 is this Fine Silver Proof Gilded coin. It was designed by Reg Mombassa a famous Australian Artist who specialised in abstract design. It was issued in a plush case with certificate. 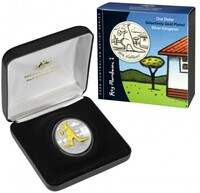 The coin was issued with a 2008 date in a number of other ways.

Bullion value: USD 23.41 Search tips
This value is given for information purpose only. It is based on a price of silver at 753 USD/kg. Numista does not buy or sell coins or metal.