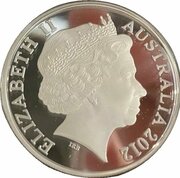 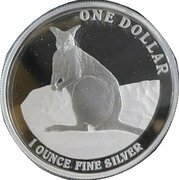 Issued by the RAM in a capsule in a plush case is this Fine Silver (.999) Proof 1 ounce coin.

The coin features a Mareeba rock-wallaby. Identifying them can be difficult without the help of a microscope. Mareeba rock-wallabies are almost indistinguishable from several other Petrogale species, including Sharman's rock-wallaby and the Allied rock-wallaby. These endearing Australians all have well-adapted feet for hopping over rocky terrain and long flexible tails. Their most significant distinction is the distribution, shape and number of their chromosomes. It wasn't until 1992 that the Mareeba rock-wallaby, named after an area in Queensland where it is found, was declared a separate species.